The Hall of Fame Series will be the cream of the crop, the most ridiculous of the absolute ridiculous or even the best of the worst. You can count on the Casino Guy Reviews HoF to represent only the top of the food chain in gaming. At the end of the year, we will ask you to vote on who will get in and who will have to get back in line with Barry Bonds and the other rejects. And without further ado, Casino Guy Reviews presents another nominee for the prestigious CGR Hall of Fame:

When you set out to gamble at every establishment in the world, you are going to experience a lot of firsts.  You are going to see a lot of shit, feel a lot of feels, and occasionally taste something that will leave speechless.

It was a beautiful spring day many years ago and Casino Guy was coming off a beating at the Sands in Bethlehem.  Instead of going right back the way I came, I took a small detour to King of Prussia, PA to hit the Valley Forge Casino.  King of Prussia is part of the extended metro Philly area.  Lots of low rise office parks and tree lined streets.  The casino is tucked in between some other business which is kind of odd.  But this is not an official review.  This is to talk about pure greatness.

One of those firsts I mentioned earlier was that Valley Forge Casino charged an entry fee. 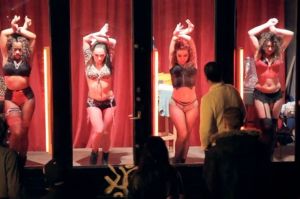 Better bang for your entry fee buck – a ZJ from these ladies or an egg sangy at Valley Forge?  It’s not even close!

Ten bucks paid one time will get you in or you could buy a season pass (I think).  Whatever, I was going to be there for mere minutes so I ponied up the Hamilton.  This was the first time I had seen this in the United States.  Casino Niagara on the Canadian side of Niagara Falls had one and so did the Holland Casino in Amsterdam.  Contrary to popular belief, neither of those entry fees came with a hand jibber.  The Valley Forge entry fee came with a $10 dining credit.  I guess I get the overall strategy behind the math – $10 in/$10 out.  Frankly without the credit, the greatest breakfast sandwich known to man would have never been ordered.  In the interest of full disclosure, it was early in the morning.  I was a little hungover.  I had a LONG ride ahead of me and I was starving.  NONE of these factors influenced this Hall of Fame nomination.

After getting a fraction of my money back from the night before playing Three Card Poker, the road was calling.  I went over to the only restaurant open at the time to spend my $10 credit which I don’t even this is there anymore (looks like it was replaced with a Dunks – damn shame).  The only few things on the menu were obviously jacked up in price.  I mean why not, they are just getting paid back with their own money.  After a ordering and forking over my whole dining credit to a dapper looking version of Emmanuel Lewis, what I was given in exchange still cannot be put into words.

First, you would have thought Wolfgang Puck or Gordon Ramsey created this ham, egg and cheese on a grilled bagel.  Nope, it Manute Bol.  Ok maybe not the ACTUAL Manute Bol, but this cat was 100 feet tall and weighed no more than 60 pounds.  He manned the grille like while his manager, Muggsey Bogues handed him his ingredients.  A match made in heaven.

Which dynamic duo was responsible for this culinary delight?  Who ya got?

I had to hit the road so I brought my breakfast into my truck.  After one bite, I was paralyzed.  The ham was the right amount of crisp and tender.  The egg was perfectly fried with cheese melting into every nook and cranny of that grilled bagel.  I didn’t even touch the potatoes Manute packed along with my sandwich.  It was impossible to take your attention away from this sandwich.

Not the actual sandwich, but you get the drift.

Ever since that day, I thank the Lord above for not letting me miss this meal.  I can say without a shadow of a doubt, this was the finest thing I have ever eaten at a casino. Because of this, we hereby nominate the breakfast sandwich at the Valley Forge Casino in King of Prussia, PA for induction into CGR Hall of Fame.