I am reposting this one because the picture of the 4 Horsemen of the Apocalypse makes me laugh every time….plus it’s a perfectly timed read so that your legs won’t fall asleep before you need to wipe up.

When you gamble with a group of friends, someone usually comes out ahead. I think it is rare for your whole crew to come out on the losing end of things especially when every crew has the conservative guy, the aggressive guy and the guy who has no clue what the hell he is doing. And it is usually the guy who has no freakin’ clue what’s going on who winds up walking away with a few extra bucks in his pocket.

No game has this happen more often than Craps. Folks who know what they are doing usually get a little ahead of themselves placing bets all over the table and then when a roller craps out, they are left holding the bag asking “wha..wha…what just happened?”. The guy who doesn’t know what they’re doing only has money on the pass line or on six the hard way and will end up plus $2.50 at the end of the day. Or they get lucky and they end up with double everyone on the table by playing like a blind monkey putting bets on anything and everything… I am never that guy.

There is one thing the Craps player needs to be and that is self aware.  Self aware of what you may ask?  Do I have a tendency to roll a lot of sevens? Sevens and elevens are great on the come out roll. Front line winners for everyone! BUUUUUUT, the euphoria of getting those few $5 or $25 winners before the point is set wears off pretty quickly when you realize that is a grim foreshadowing of what is to come.

“I think self awareness is probably the most important think towards being a champion.”  Billie Jean King

Not all craps players like to admit they can’t roll. They all believe they are Nick Papagiorgio and can roll for hours when in fact you should be loading up on the Don’t Come line (the biggest dickhead move in the entire casino as you are betting WITH the house and AGAINST the players at the table. Oh the humanity!) on yourself.

“Self awareness is one of the rarest of human commodities.  I don’t mean self consciousness where you’re limiting and evaluating yourself.  I mean being aware of your own patterns.”  Tony Robbins

Bellying up to the Craps table

at Foxwoods one rare not-so-busy Saturday afternoon, my group of donkeys had delusions of grandeur. We were going to bring the house down! They were going to need to bring us to the back room to pay us! This was our day dammit!!!

The table started well. The folks at the other end of the table were treading water – a point here and there. A number or two with a hardway sprinkled in. Ultimately, we made couple bucks.

The roll comes to our side. There were four in our little gambling Wolfpack, including Wingman #1 and Wingwoman #1. I mention this because the combined good luck mojo of these two is the equivalent of Clark Griswold at the Cheapo Casino. Our 4th, Kenny, rolls first. He is the guy who has never really played before. We are going to ride his newbie ass to Winnertown like Justify in the Triple Crown.

Point set at 5…3 crap….7 out. WTF just happened? I will tell you what happened. Nothing good that’s what.  Brand new players, 6 foot tall 90 year-old Asian men and extremely hot women with low cut tops who blow……..wait for it….on the dice are supposed to be guaranteed winners. Is this a sign for things to come?

“As you become more clear about who you really are, you’ll be better able to decide what is best for you the first time around.”  Oprah Winfrey

Next up was Wingman #1, who is well documented as a feast or famine gambler. On this day, he was Starvin’ Marvin.

WM#1 comes out firing sevens and elevens. Helps put a dent in the abortion of a roll Kenny just had. But as you know, darkness is coming. Point set at 8…number number…f’n 7 out. For those keeping score at home, that’s 5 rolls after the point is set with no winners, no matching numbers and 2 sevens.  Tell em Kristen….

Next up is Wingwoman #1, my muse. My love. My Black Angel of Gambling Dea 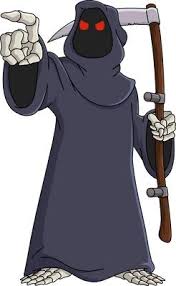 th.  I have dragged this woman all over the world and there has never been a time when I’ve gotten on a real roll, I mean really cookin’, with her within 100 miles.  Today was no different.  No points, no numbers, just an avalanche of sevens.

I have a sense when things are going bad and this was bad.  “Gee ya think, Casino Guy.”  Yeah, I do think random reader.  But I also have an ego large enough to think I can turn the day around.  And to my credit, I have always been a number rolling machine.  I rolled a point and a few numbers on my turn but not enough to mitigate the damage done by the Three Musketeers before me.

After some moans and groans from the rest of the table, which has cleared out considerably since the Four Horseman of the Apocalypse grabbed the bones

, a few other randoms tried rolling and actually made us some money.  Again not enough to make up for four straight “load up the boards and shit the bed right away”, but it was something.  And just like the tides, here come the dice again.  Kenny’s up again.  And Kenny promptly not only rolls 2 and 3 crap on the come out, loosing that pass line roll twice, but as soon as he establishes 6 as the point – BOOOOM – 7 out.  Are.  You.  Porking.  Me.

Hey Wingman #1, why don’t you roll again?!?!  What is the worst than can happen?

You guessed it.  Immediate 7 out.  This massacre was right out of a horror film.  Finally, the tall dude next to the stick man has had enough, stands up straight and calmly says: 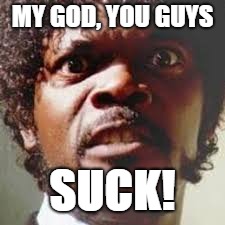 I swear to you this man was Samuel L. Jackson’s long lost brother.  In that moment, I became very self aware that today may not be my day at the table.  That I, better yet WE, need to realize our shortcomings as dice throwers and move along.  And move along we did.  Wingwoman rolled again and posted a respectable back-to-back points.  After she crapped out, I passed on my roll.  I was not looking for any great vengeance or furious anger to strike down upon me or the others.

“Robots may gradually attain a degree of self awareness and consciousness of their own.”  Michio Kaku

That quote had nothing to do with nothing.  It’s just something we all need to be on the lookout for.  #Skynet

Kenny Rogers famously crooned, “…know when to walk away, know when to run”.  That day we ran.  We probably should have run a lot sooner.  In a disgusting 20 minute display, we won the Lifetime Achievement Award for least self aware assholes on the planet. 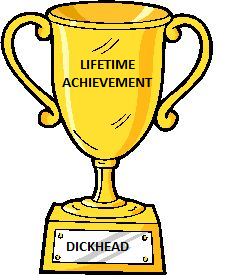