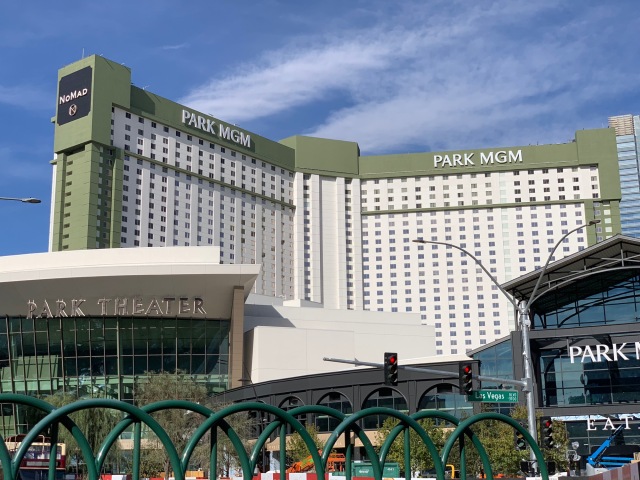 Park MGM is one of the strip’s latest updated properties that tries to take a gambling joint out of the past and into the future. The old Monte Carlo’s decor and atmosphere was starting to fall behind it’s trendier competition. A few million bucks to spruce the place up a little and work in a little fire (nothing to see here!) to jump-start the project and you have the latest new name on LVB.  Did the renovation and rebrand make you feel like you weren’t in an old, mothballed card room in the south of France? Let’s find out…

If I’ve said it once, I’ve said it a hundred times. It’s the strip so it’s not difficult to actually get there initially. If you are walking however, it gets a little tricky. On the one hand, you are right next to New York, New York and “across” from the MGM. As an added bonus, Park MGM shares a driveway and rotary with the T-Mobile Arena. To say it’s convenient to the attractions on the south side of the strip would be an understatement. Because the remodel isn’t done, the front door doesn’t exist so you have to go in through the side loading dock or another random door. Not ideal but temporary (according to some of the staff, nothing befuddles them more than the decision to not open the front door but I digress).

On the other hand as first reported here in the Aria review, to get to the north side of the strip you need to navigate the bridge and escalator/stair system around that monstrosity. After a night out or the morning after, I would rather take a series of kicks to the nuts that have to deal with this bullshit. Throw in seemingly every other escalator being out of order, the herds of degenerates breathlessly trekking up and down stairs just to get by the Aria was a low point of the Casino Guy’s career.

The exterior still under some construction so the jury is still out on the end product. No longer off white and tan and now a nice shade of off white and sprinkle of green, the partial outside review is a thumbs up.

The review of the gaming floor is seven simple words: It’s the same as the Monte Carlo.  Same chandeliers, same carpets, seemingly the same layout, slightly different colored walls, so there is that.

The hotel check in area was, uh, different.  No main desk, just kiosks.  Not ideal after the red eye out, but a cool concept.  The rest of lobby was great. 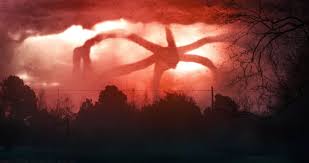 The thing on the ceiling, which was either a big tree or part of the Upside Down creeping through a tear in the dimensions wall.  The rooms were decked out with mood lighting, aroma therapy machines and high end beds.  All this sets up nicely for the Monte, I mean, Park MGM to serve as a higher end place once they are all done.

I have to say, for a full service joint on the strip they did not have the level of variety I was hoping for.  If you are going to be light on total number of tables, give me something I can’t see other place.  Give me gimmicks I like, not shit ones.  Give me value.  Park MGM’s offering was just meh.

On the higher end of things, I can’t say enough about how great the high limit area was.  The staff was phenomenal to me and my crew of ne’er do wells.  We had no issues getting our own table with a pretty reasonable limit.  Also, we were hooting and hollering most of the night and didn’t get the hairy eyeball even once.  There is something to be said being able to play at a table with just your friends and not having some scumbag parachute in, play a hand and pull the ripcord out two hands later.  Granted we had to pay a premium to do so, but Park MGM had the option available to us.

I have to say, for this particular visit, we saw the most diverse cross section of people ever under one roof.  Let’s break this down by group:

Group A -The PBR World Championships were happening literally next door at the TMobile Arena that week finishing on Saturday.  It was belt buckle and cowboy hat city.  Some of these buckles probably cost more than my wardrobe.  The hats were 15 gallons, not 10.

There was more denim in this crowd than in a Canadian Levi Strauss factory.  These folks were here to party, wear logo’d vests, boots and drink anything not locked up behind the bar.

Group B – The Las Vegas Marathon was on Sunday.

You had hardos everywhere wearing their jackets from other races, carrying around their water jugs and acting like they were better than everyone they walked by because they could jog for a couple hours without having a massive heart attack (screw you, I am not bitter at all).  In all seriousness, this was a big deal that had WAY more people than I expected all over the strip.  Needless to say the jumpsuit wearing, New Balance rocking crowd seemingly didn’t gamble at all.

Group C – The NoMad Hotel (the super trendy hotel within the Park MGM Resort) was having a grand opening celebration on Saturday night with pretty people from all over attending the gala.  Some of these pretty people looked a little out of place at the Monte…DAMMIT…Park MGM atrium bar along with the cowboys and marathoners.

Group D – The Park was hosting an accounting convention.  Nerds, nerds and more nerds littered the floor on Thursday and Friday.  They stuck out like sore thumbs.  The oil and water mix of cowboys and nerds was AWESOME to see on Friday afternoon.

Group E – It’s gambling season baby.  The NHL, NBA, NCAA football and basketball and the NFL are all in full swing.  Jemokes like Wing Man #2 and I were EVERYWHERE.

Group F – Lark Nation.  Enough said.  There had to have been an assisted walking apparatus convention because I have never seen this many people who could not be on their feet for more than a few minutes.

Without question the highlight of the visit.  The large subway tile in the bathroom near the sports book was a nice touch.  The fact that this particular bathroom was so clean throughout, it made me wonder how many dudes were in there cleaning at one time.  Were there people undercover working?  Were there ghosts?  How could this be so clean on a busy football weekend next to a sports book/restaurant?  Completely shocking.

Bathrooms in the rooms were awesome too.  My only issue was the glass shower door was right in front of you when you are sitting on the shitter.  Fairly graphic if I have to be honest.  Graphic.

It did’t matter where you went, the folks at Park MGM were great.  The dealers were more than friendly, even the cooler they sent to my table on Friday night was pleasant (I see you Mary!).  Aside from a bartender shift change at the book where I think we just got lost in the shuffle and were dry for, wait for it, a whole 10 minutes, you could not have asked for better service.

This is a tough one.  A lot of places to eat were closed for the renovation (I think).  The food at the book was fine.  The apps at the NoMad Bar were phenomenal (according to Wing Man #2).  Just wish there were more options.

On the flip side, the Makers Old Fashioned I had at NoMad Bar was one of the best I have ever had.  Juniper Lounge was full of pretty people with cocktails to match.  Fast service on comped drinks are key when you are looking to do some damage at the tables and this place does not disappoint.  Even if you ask for a Makers on the rocks while slinging dice and they actually give you house whiskey, that shit doesn’t matter because it comes out so fast.  Comped drinks at the book were only available with tickets you got from placing a bet.  They didn’t always give you the right number of tickets when you placed your bets but oh well.  If I have enough money to bet on the 3rd period line on the Flames versus the Canucks, I have enough to buy a draft beer.  Overall, there was enough (too much) liquid courage to go around at all times.

There were a lot of positives at Park MGM, but also a lot of things that left you either wanting more or scratching your head asking why.

I get that the focus was on the high end hotel that opened the weekend I was there and they are probably catering to a different clientele these days BUT the least you can do is open the front door and let people in.  Also, maybe move one table over 6 inches to make it look like a different place to gamble than the old joint.  One of the dealers hit the nail on the head, “This new hotel better be a home run.”  I can’t wait to see when they finish how this place is received.  The strip’s sidewalk has been rerouted to literally bring you steps from the gaming floor.  Now just open the fucking door and let people in.

Official Casino Guy Rating:  Trip Jacks – a good hand but you are one or two cards away from a big winner.  It’s fine.  It’s really…just…fine.